Karimikui factory is part of the Rungeto Farmers Cooperative Society that also houses the renowned Kii factory. Rungeto has one more wet mill in its ranks: the Kiangoi factory. At Rungeto FCS, these three factories are what remains of Ngiriama FCS, formerly one of Kenya’s largest cooperative societies. After the structural changes, Karimikui reopened for processing in 1997. Nowadays, Rungeto represents roughly 9% of the smallholder coffee producers in Kirinyaga.Thanks to its investments, Rungeto plays an important role in the development of the nearby community. Next to processing coffee, they have also set up a dairy cooling plant and a fuel station. These operations generate extra job opportunities. Furthermore, farmers can diversify their income with the milk from their cows.

Post harvest
Predominant varieties in the region are SL28 and SL34, with pockets of Ruiru 11, Batian and K7. Registered producers deliver their cherries to Karimikiu. The central factory then wet processes the coffee in typical Kenyan style. The cherries are sorted on maturity and processed separately per quality group. The coffee is depulped and ferments for up to 24 hours.

Next, the washing station staff washes the coffee by pushing it through channels with water. This step already sorts the coffees on bean density through flotation. The heaviest qualities sink while floaters go all the way to the end of the channel. The highest qualities soak for an additional 24 hours in clean water before going out to the drying field. The coffee dries on raised beds for an average of 10 days.

When the coffee reaches 11% moisture content, Kenya’s registered marketing agents take the coffee to the weekly auction. In this auction, registered buyers can bid on the coffees they liked. Each buyer can take samples from the auction’s sample room to evaluate in his own lab, a week prior to the auction.

KENYA
Coffee production in Kenya dates back to the late 1880s. Around that time, French Missionaries reportedly brought seeds to the Taita Hills area. In the Kiambu district, coffee found a great combination of altitude, soils and temperature. The result of that is high quality for which Kenyan coffee has global fame. Still today, the biggest coffee growing area spreads from Kiambu, on the outskirts of Nairobi, up to the slopes of Mount Kenya. Kiambu, Kirinyaga, Murang’a and Nyeri counties make up the region known as Central Kenya. This region has an annual production of around 39,000 metric tons of green coffee. This volume accounts for almost 70% of the national production. Other coffee growing areas are Machakos (Eastern Kenya) and Bungoma (Western Kenya), but volumes are significantly smaller.

Climate
Although patterns may differ from area to area, in general, Kenya has two main rainy seasons which dictate two crops. Long rains occur from March to May, while a shorter rainy season occurs around October. The dry spells that anticipate those rains trigger two flowering periods: February/March for the country’s main crop, and September for the early or ’fly’ crop. Central areas are able to produce and deliver coffee in both seasons, whereas Machakos, for example, only produces coffee during the early crop season.

Coffee plants naturally find extremely fertile soils in Kenya’s growing regions. Soils are young and volcanic and very rich in organic matter. The altitude in coffee growing areas ranges from a minimum of 1280m in Embu (Eastern part of Mount Kenya region) to a high of 2300m in Nyeri (Western slopes).

Organization & Processing
Nowadays, approximately 55 % of all coffee production comes from smallholder farms. The number varies greatly from area to area (Kiambu 14%, Kirinyaga 72%, Machakos 80%). Smallholder farmers are organized in Cooperative Societies. These societies own the wet mills where farmers deliver ripe cherries for processing.

After depulping, washing and fermentation, the washing station staff pushes the coffee through the washing and grading channels. Still at the washing station, they grade the coffee in P1 (heaviest parchment), P2 and lights (floaters). This makes it easy to remove remaining cherries for separate processing. Coffee dries in the sun on raised tables, a process which can take up to 3 weeks. At night and during the hottest periods, parchment is covered so that drying is gentle and homogenous.

Finally, the dry parchment moves to a centralized dry mill. The mill processes, screens and grades the coffee, prior to the weekly auctions in Nairobi. Approximately 90% of the entire coffee production follows the washed process. The remaining 10% consists of usually unripe cherries. These dry on trays in the sun, a process that can take up to 5 weeks. The resulting coffee goes to market as ‘Mbuni’. 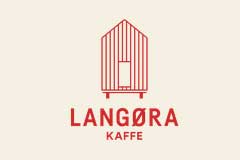 Langøra Coffee Roasters are based in a little red ‘ Stabbur ‘, a traditional storehouse at Hjelseng Farm in Stjørdal, Norway. We select and purchase traceable speciality coffees, in season, with characteristic flavour profiles that excite us.
The quality of coffee depends on factors such as region, terroir, variety and processing. Together they contribute to form each coffee’s unique flavour. Through the roasting process the team at Langøra wish to highlight these characteristics, so that the natural flavours and aromas of the coffee are preserved.